“Hey, do you have any travel books on Armenia?” I ask the bookseller at Elliott Bay Book Company in Seattle’s Pioneer Square.

“Armenia? Where’s Armenia?” he queries. “East of Turkey,” I respond. “Oh, OK.” He starts to wander off but, a few steps later, turns around. “How do you spell that?” “A-R-M-E-N-I-A,”. He’s disappears down the stairs and I scan the shelves in the travel section. Nothing under ‘A.’ Nothing under Eastern Europe. Nothing under the Middle East. Nothing.

A few minutes go by and he pops his head around the corner. “Sorry. Could you spell Armenia one more time.”

I admit I felt defensive, even though it wasn’t long ago that I fell into the “Where is Armenia?” camp. Until my husband and I began our Armenian adoption adventure, I would have been hard-pressed to offer anything more than a cursory understanding of Armenia’s geographic location. 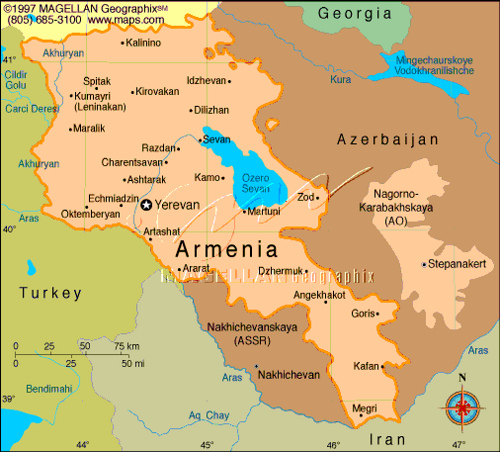 Here I was, with someone who lives in the age of global information, works in the world of books and has no clue where Armenia is. Or even how to spell it. If this was the scenario with my bookseller, what would happen when, down the road, we become adoptive parents and try to field the many questions about where and what and who to our child’s friends, classmate, neighbors and relatives?

The experience was a potent reminder that I have so much more to learn. And so much more to teach. Part of my role as an adoptive mom of a child from Armenia will be to glean as much as I can about the history and customs of this rugged land, instill a sense of pride and create an aura of respect for our child’s heritage.

Armenia is an ancient country, located in the highlands surrounding the Biblical mountain of Ararat, upon which, according to Judeo-Christian history, Noah’s Ark came to rest after the flood. (Gen. 8:4). Nestled in southwestern Asia, Armenia is slightly smaller than Maryland and borders Turkey, Azerbaijan, and Georgia.

Over the centuries Armenia came under the sway of various empires including the Roman, Byzantine, Arab, Persian, and Ottoman. The culture, food and customs of the Armenian people reflect these influences.

And for me, adoptive mom-to-be, Armenia holds another fascination. This will be the birth country of our child, and traditions my husband and I hope to learn more about, share with our child and embrace in our home.

Some might fend off a mid-life crisis by leaving the comforts of their corporate salary to jet off to a deserted island. Others might buy a Jaguar. I’ve chosen to dive head-long into my 50s and beyond by becoming a first-time parent. At any given moment you might find me holding a camera, a spade, a spatula or a suitcase. Or my little girl's hand. Adopted from Armenia, she puts the Pampers and Paklava into my life.

Unless specifically mentioned, all images on my blog are my own original photographs and, therefore, copyright protected (©Beth Shepherd). Feel free to use my images for non-commercial use so long as you provide me with the image credit. Likewise, if you pin my images to Pinterest, please mention me by name.